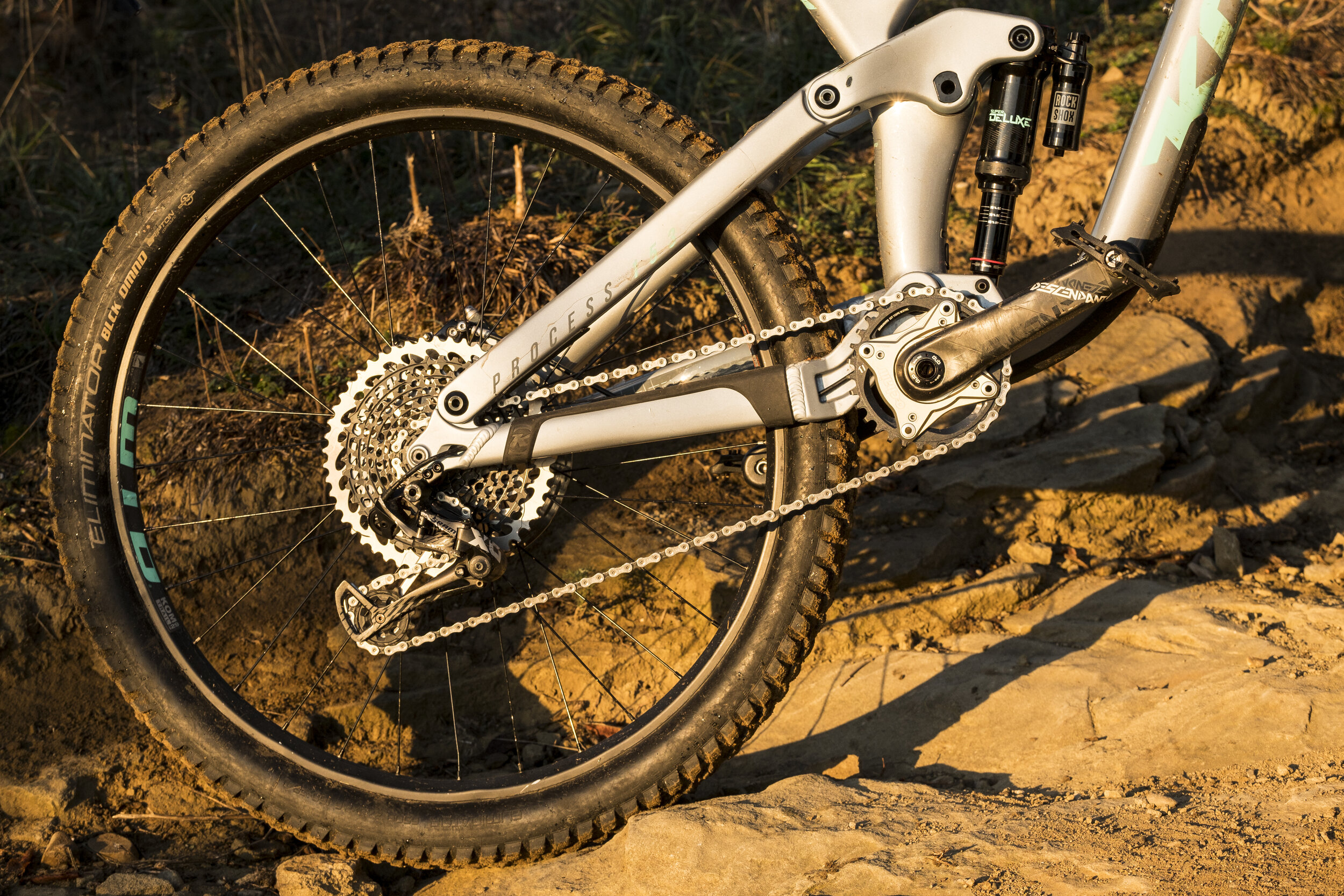 Once upon a time...I was staring at the monitor, following UCI WorldCup in Hafjell just like a typical downhill rider and fan.

When Mulally had his incredible chainless ride (VIDEO), my inner nerd and engineer started to ruminate “Which kind of advantage could came from this situation for the rider or his bike?”

One year later, nearly the same story repeated in front of me, with Aaron Gwin winning in Leogang: Chainless (VIDEO).

After that run I decided to study and research, to unfold a new riding scenario: chainless riding, with possibility to maintain the pedal stroke.Thanks to the increasing success of single chainring system, the road was given.

An informal gathering of passionate engineers, riders and designers started working on an active spider concept.

After first prototypes and tests things started to get serious, we decided to go for an industrial production and to deepen the research and development process. We engineered an easygoing component, fitting most standards on market with BDC 104 standard chainring.

Many different potentialities were offered by such a small object, we felt the need to understand-and ride-them!

It also mean low bike “reactivity”, with a “more travel” feeling and saggy suspension while pumping.

From these outcomes, we decided to play with different riding conditions, in order of leaving the freedom to decide how many degrees remove, when needed.

OCHAINnow comes with three degree optional setups: 6°, 9°, 12° and works as shown below. How did we reach this setup range?

Compromises are due, contemporary mountain bikes are all born from them. Pedal kickback is one of the consequences, affecting rear suspension performance, despite the best engineers’ efforts. 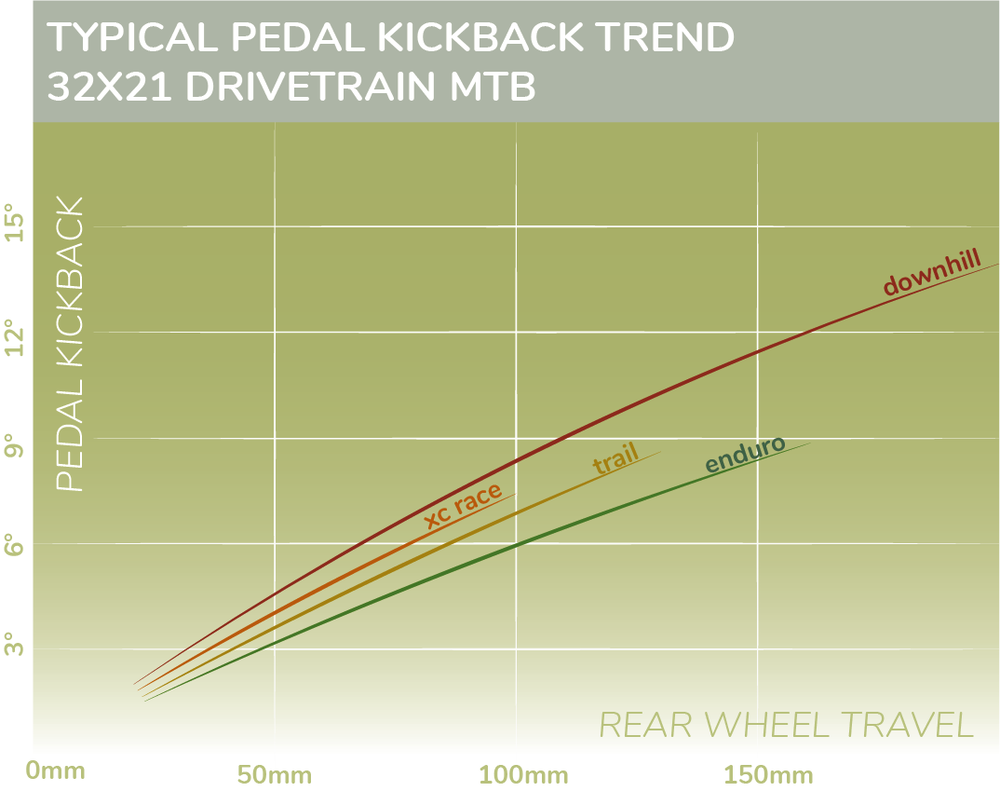 OCHAIN active spider can remove or reduce pedal kickback, isolating transmission effects from rear suspension when needed. Coming to the setup possibilities, there is no right or wrong, but a need for a deep comprehension of what makes things flow at their best. 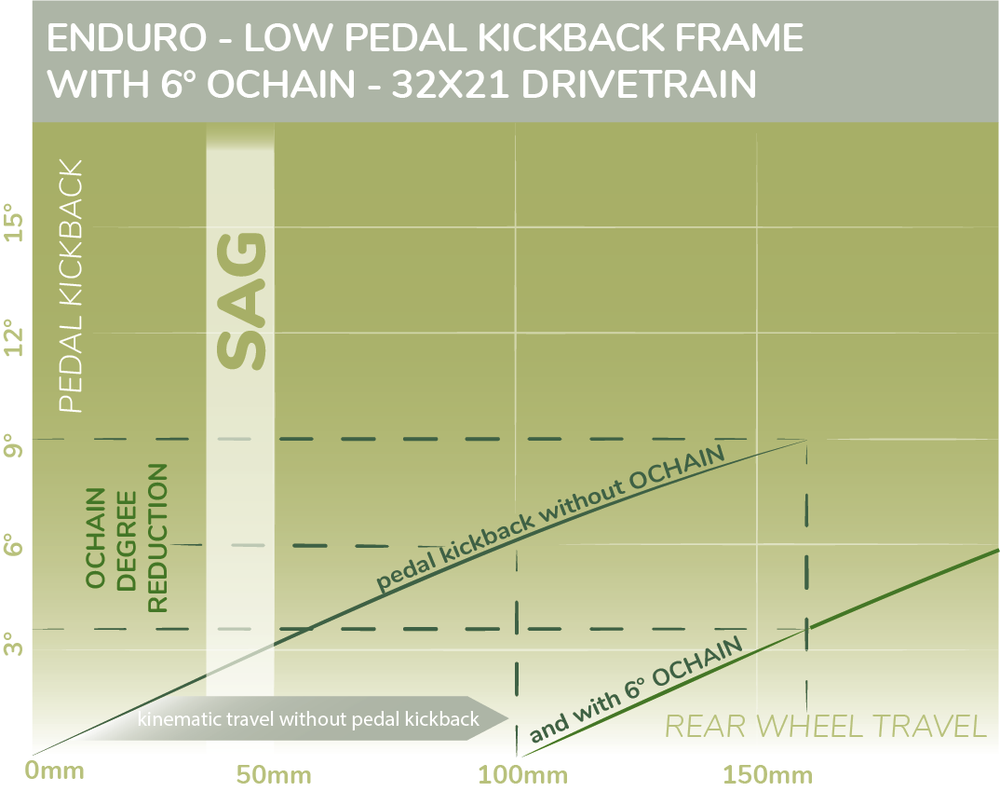 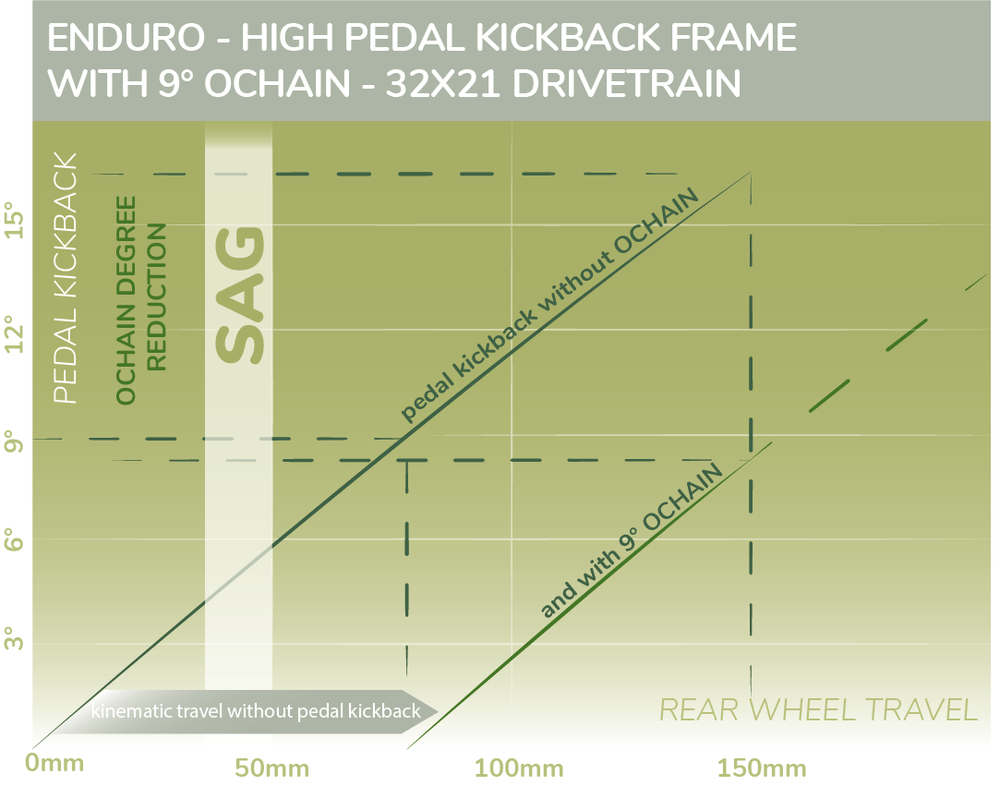 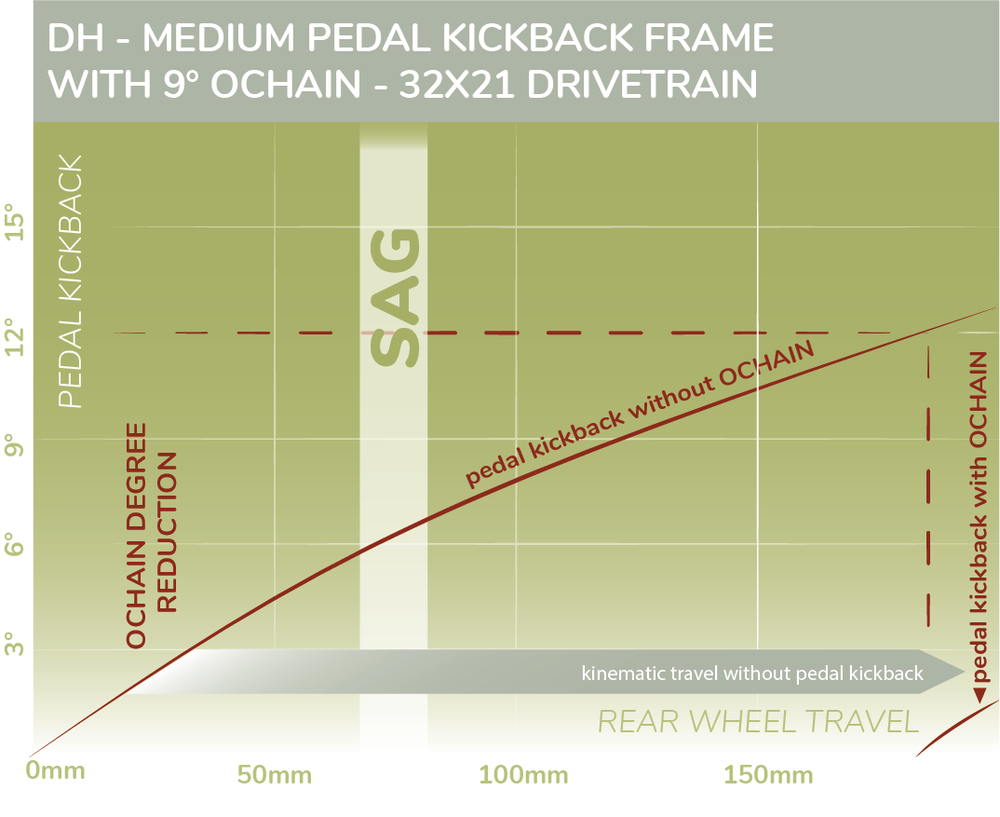 From the graphs above, it’s clear that you can either transform your DH bike into a flowing chainless machine or getting a more efficient Enduro bike, adding a chainless feeling in the first part of travel.

Are you going to race downhill on Val di Sole Black Snake track?

Are you going to race enduro on the rocky La Thuile trail?

Are you going to ride with your friends in a bike park for a whole weekend?

If you want to fully understand OCHAIN possibilities and get serious about setup, here you will find the bones of the whole project. 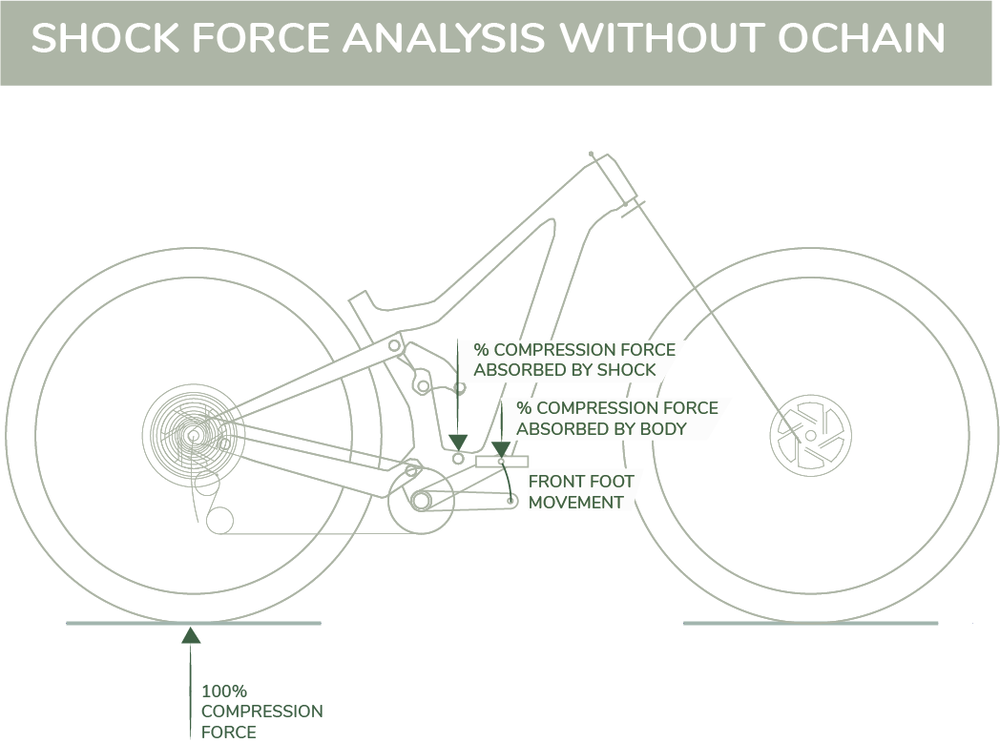 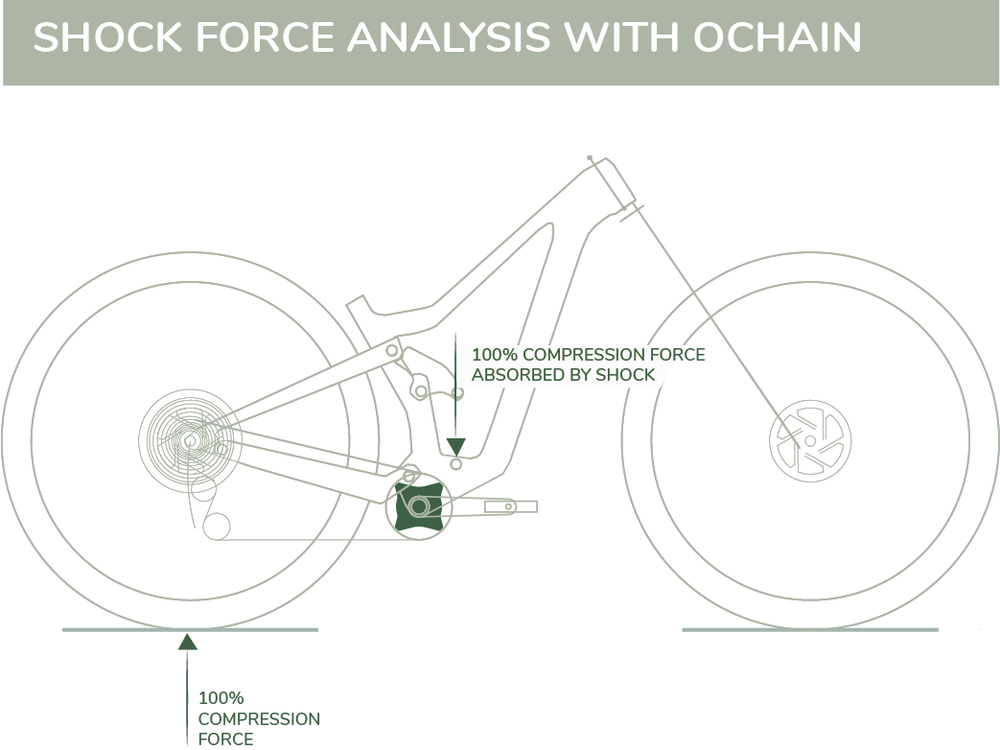 Compression force comes from the ground and theorically goes to the shock. For many reasons in real life part of it is absorbed by the rider’s body. The chain is pulled, the pedal goes up, the foot is kicked: sometimes the rider can deal with it more, sometimes less. Sometimes riders just passively receive it, sometimes more experienced riders answer with unconscious continuous adjustments.

In certain conditions (i.e.brakes bumps) it’s almost impossible to deal with pedal kickback, especially for flat riders. A downhill Elite rider underwent some Telemetry tests for us: as a result, after mounting OCHAIN, he had to add 50 lb on his shock’s spring to maintain the bottom out performance. This means the force being absorbed by his front foot was quiet a lot.

With OCHAIN at his maximum setup (see graphs above for range and degrees) no force component reaches your foot, resulting in the famous chainless feeling.

What if we need reactivity instead? When we want to pump the bike, the rider’s force inhibit suspension, through pedals. The rider “reduces” the travel of his bike. Where, in the travel, we pump the bike? From middle to max travel. With OCHAIN is possible to keep the same bike reactivity, choosing a low degree setup, as shown in the following graph. 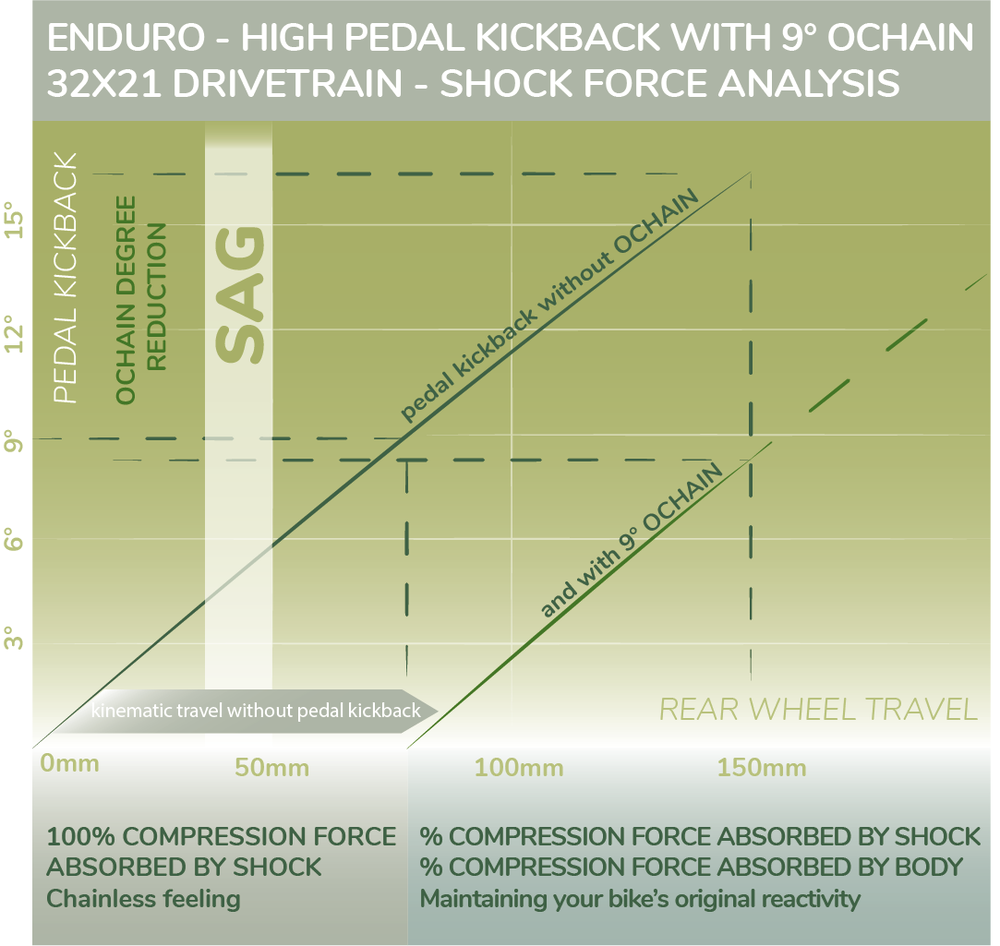 OCHAIN is a new component in mountain bike setup. You can decide to use it in its different configurations or not, we are very curious to see how mtb world will receive it. See below for our first on field suggestions (click or tap to enlarge).